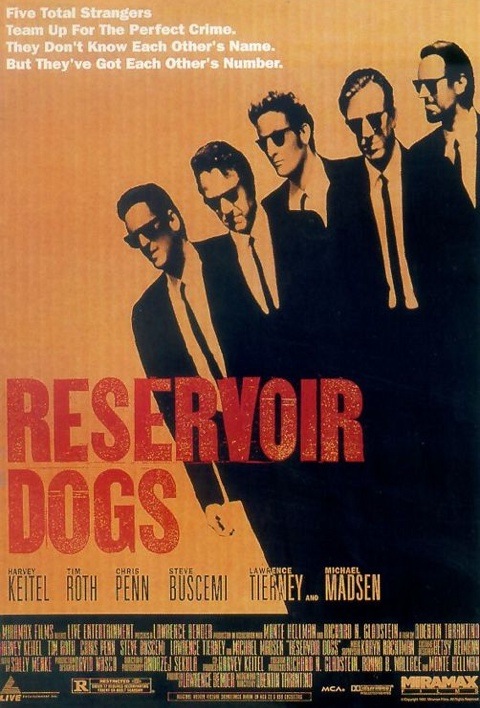 The following analysis reveals a comprehensive look at the Storyform for Reservoir Dogs. Unlike most of the analysis found here—which simply lists the unique individual story appreciations—this in-depth study details the actual encoding for each structural item. This also means it has been incorporated into the Dramatica Story Expert application itself as an easily referenced contextual example.

Mr. White refuses to believe that Mr. Orange is the “rat,” even when all evidence points to him.  When Mr. Orange confesses to him, he is anguished over the betrayal but remains true to his criminal nature and shoots him, at the cost of his own life.

Mr. White must stop believing his own (faulty) instincts.

When the cops close in on Mr. White, he empties both guns into them rather than figuring a way to escape the conflict.  He pulls his gun on Mr. Blond instead of arguing with him.  He forces a shoot-out with Joe and Mr. Nice rather than re-evaluate his beliefs about Mr. Orange.

When Mr. White is confronted with a problem, his solution is to pull out his gun and eliminate the cause.  He comforts the injured Mr. Orange by telling him not to worry, “it takes days to bleed to death” from gunshots to the stomach.

Joe decides to form a gang to pull the heist; Mr. Orange chooses to go undercover; Mr. Nice allows Mr. Blond to stay in the warehouse with the kidnapped cop.  At film’s end, Mr. Orange decides to confess to Mr. White, who decides to kill him rather than giving himself up to the police.

Although Mr. Pink wants to go to a motel and Mr. Orange wants to be dropped off at a hospital, the robbers must wait at the warehouse for the arrival of their boss, Joe.  In the search for the informant, various members of the group are eliminated as suspects; when Joe arrives, he narrows it down to one—Mr. Orange—and forces a showdown.

The robbers fail to escape with the diamonds; the undercover cop has apprehended the gang but is finished off when he identifies himself as the “rat.”  Everyone dies a violent death.

Mr. White defends Mr. Orange’s honor and his life in a three-way shoot-out with his colleagues.  He suffers intense anguish when he learns Mr. Orange betrayed him; in killing Mr. Orange, he seals his own fate.

The story in Reservoir Dogs revolves around a jewelry heist.  When the robbery is bungled, the “colored men” endeavor to find out who the “rat” is.

The robbers want their cut of the diamond heist and to escape capture by the police; the undercover cop, Mr. Orange, wants to apprehend the criminals and recover the loot.

Each of the robbers is out for themselves.  As Mr. Pink says to Mr. White, “I don’t want to know your name.”  Mr. Pink talks about himself incessantly, and feels it’s safer for him to leave the warehouse and go to a motel.  The robbers gun down anybody who impedes their escape, whether they be police officers, an innocent motorist, or employees who ring the alarm.

Avoiding the cops and their informant will allow the robbers to escape; avoiding discovery by the robbers will keep Mr. Orange’s plan to capture them on target.

Despite the fact they have bungled the heist, the robbers remain true to Joe’s plan and meet at the warehouse to wait for him.  Under torturous conditions, the uniformed cop exercises self-control and refuses to divulge the identity of Mr. Orange.

Mr. Blond runs amok at the site of the heist and again at the warehouse; Mr. Pink’s instincts are not to wait for Joe but rather to hightail it to a motel; against explicit orders, Mr. White gives his real name to Mr. Orange.

After Mr. Orange kills Mr. Blond to protect the uniformed cop, he has trouble justifying his action to the other robbers and becomes the main suspect as the “rat.”

Because of Joe’s rigorous screening process, it takes awhile for the robbers to accept that one of them is a “rat.”

The robbers struggle to understand who the “rat” is and how much the cops know.  To infiltrate the gang, Mr. Orange must understand their methods and appreciate their belief in honor amongst thieves.

Mr. White is in a situation, caught between the group he belongs to and the individual with whom he has become attached.  As the song says, “I’m stuck here in the middle with you.”

Mr. White is concerned with not going to jail.

Mr. White holds onto his positive evaluation of Mr. Orange, and refuses to listen to his colleagues’ logical argument that he is the “rat.”

Mr. White’s responsibility to help the injured Mr. Orange pits him against his colleagues.  He inadvertently helps Mr. Orange’s endeavor as an undercover cop by killing his colleagues, but is distraught when he learns he has helped the cops effect his own downfall.

In order to avoid jail, Mr. White should be hindering the “rat,” not helping him.

In the restaurant, Mr. White takes the address book from Joe and tries to impose conditions for its return.  He also tries to take control of the situation in the warehouse and get Mr. Orange to a hospital, but Mr. Pink insists they wait for Joe, the man in charge.

In a confrontation with Mr. Blond, Mr. White loses control and pulls out his gun.  In an effort to go along with the program, Mr. White leaves the warehouse with Mr. Nice and Mr. Pink; this allows the out of control Mr. Blond to torture the cop.

Mr. White’s decision to back up Mr. Orange rather than believe Joe triggers the story’s climax.  If he had made the correct choice by not supporting Mr. Orange, there would have been more opportunity to achieve the story goal.

Mr. White’s overbearing attitude alienates him from his colleagues, especially as he’s just another “employee,” not the boss.  He threatens, “If you dream of shooting me, you’d better wake up and apologize.”  Mr. Blond snidely says to him, “I bet you’re a big Lee Marvin fan, aren’t you.  Yeah, me too.  I love that guy.”

Mr. White judges Mr. Blond to be a liability based upon his uncontrolled behavior at the heist, and Mr. Orange to be righteous based upon his taking of a bullet from, and the shooting of, the female motorist.

A middle-aged professional criminal, who adheres to his own set of moral values—an antihero. (Played by Harvey Keitel)

There is one thing Mr. Orange can never forget—he is a cop and he must do whatever it takes to nail the bad guys.

Mr. Orange’s basic drive is to bring the robbers to justice.

Even though he’s undercover, Mr. Orange cannot deny his true nature as a cop; he shoots Mr. Blond in order to save the uniformed cop’s life.

As a cop, Mr. Orange’s professional motivation is to bring criminals to justice.

If Mr. Orange can avoid detection by the robbers until his colleagues arrive, he will have completed his task.

Mr. Orange’s actions as a criminal force the members of the gang to consider him as one of their own; Up until when Mr. Blond slashes the uniformed cop’s ear, Mr. Orange considers the situation and decides to stay mum.

Realizing they have been set up, the gang reconsider their assumption that all members, especially Mr. Orange, are who they say they are; Once Mr. Blond slashes the uniformed cop’s ear, Mr. Orange reconsiders his undercover position and shoots Mr. Blond.

Mr. White’s reassurances to Mr. Orange that he will survive a gunshot wound to the stomach serve to increase his feeling of responsibility for the man—Mr. Orange, convinced he is dying, plays as though he has bought into Mr. White’s dream that Mr. Orange will be OK.

Mr. Orange’s feeling of obligation to confess to Mr. White leads to his own execution.

Mr. Orange’s position is dependent upon what the others recall about him.

A dedicated young cop who endangers his life by going undercover as a jewel robber. (Played by Tim Roth)

Mr. Orange and Mr. White manipulate each other.

Having bonded with Mr. Orange (who took a bullet, and killed the female motorist), Mr. White feels responsible for helping him survive, even when it pits him against the robbers to whom he’s committed.

The robbers pursuing the identity of the “rat” causes problems between Mr. Orange and Mr. White.

If Mr. White had abandoned the injured Mr. Orange, or if Mr. Orange had escaped the situation, the relationship would not exist.

Mr. White believes Mr. Orange is the criminal he says he is.

After Mr. Orange gets shot instead of him, Mr. White feels responsible for his safety.

Mr. White is in denial over the possibility of Mr. Orange as the “rat.”  Mr. Orange denies his true identity.

Mr. White can’t imagine Mr. Orange as the police informant, especially after he “proves himself” by shooting the female motorist.

As well as obtaining the diamonds, the robbers are concerned with the identity of the “rat.”  Mr. Orange and the police are anxious that the robbers not obtain his identity as an undercover informant.

All the characters are transformed from vibrant tough guys into bloody corpses.

Mr. White doesn’t give in to his desire to kill the out-of-control Mr. Blond, and loses face in the process; because Mr. Pink fights his fear of capture and stays in the warehouse, he is killed by the police; Mr. Blond gives in to his sadistic impulses, costing the cop his ear.

For the robbers, there’s the possibility of spending the money in Hawaii if all goes well; for Mr. Orange, job promotion is a possibility if he’s successful.

Joe must mentally visualize what he knows about the members of his gang in order to identify the “rat.”

Joe relies on his previous experiences with the individual robbers in forming his gang.  To be accepted by the robbers, Mr. Orange must learn his backstory and recite as if from memory.

Mr. Orange relates an imagined incident from his past, in which ironically, a roomful of good guys (cops) couldn’t tell he was a bad guy; in the warehouse, he is the only good guy in a roomful of bad guys.

You've reached the "hub" for any and all Dramatica analysis of Reservoir Dogs. In addition to the Storyform, you'll also find any additional analysis or media related to the story in question.

Rebel Without a Cause ←