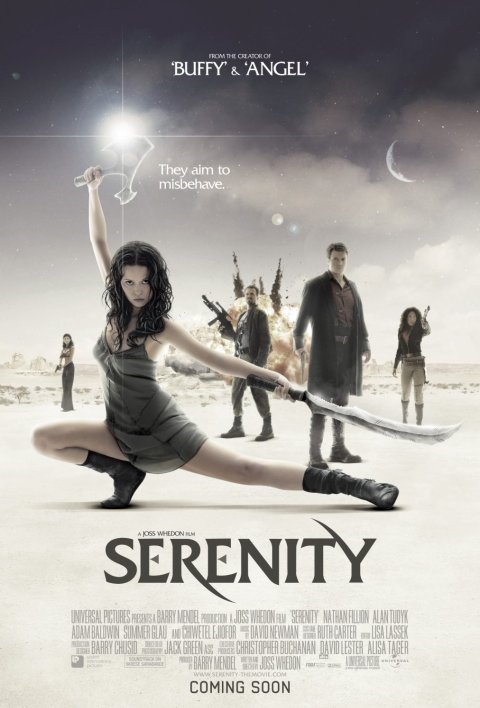 The following analysis reveals a comprehensive look at the Storyform for Serenity. Unlike most of the analysis found here—which simply lists the unique individual story appreciations—this in-depth study details the actual encoding for each structural item. This also means it has been incorporated into the Dramatica Story Expert application itself as an easily referenced contextual example.

SYNOPSIS: "The crew of the ship Serenity tries to evade an assassin sent to recapture one of their number who is telepathic."  Synopsis source: IMDB.com

Mal’s status as an opponent of all the Alliance stands for is sorely challenged. He fought for the rights of individual’s and continues to do so. When the Operator challenges Mal directly on this issue, Mal determines he is still willing to die for his stance. In his substory with Inara, he remains ambiguous about his feelings toward her: Mal: “So what are you going to do?” Inara: “I don’t know.” Mal: “Good answer.”

Mal struggles to outlast the conflicts with the crew and others caused by River’s presence, especially the pursuit by the Operative. On a more personal level, Mal waits while hoping for Inara to change her mind about their relationship.

Mal’s crew needs money…he robs a bank. Inara is in trouble…he goes to rescue her. Mal needs to get past the Alliance armada…he picks a fight with the Reavers and let’s them chase him into battle, and so on.

Cause and effect…Mal’s crew needs money…he robs a bank. Inara is in trouble…he goes to rescue her. Mal needs to get past the Alliance armada…he picks a fight with the Reavers and let’s them chase him into battle, and so on.

The inciting event is the kidnap/escape of River from Alliance control. The closing event is the broadcast of the Miranda recording. Other action driven key events include River’s reception of the hidden broadcast message and subsequent rampage, the destruction of Shepard Book’s outpost, etc.

Serenity has only a limited number of places it can go to ground before the Alliance will capture and destroy it.

River’s message is broadcast to all available outlets. The Alliance’s dirty Miranda secrets are exposed.

Mal’s over his past complications with Inara. He no longer feels his reputation is tarnished by his connection with the “losers” in the Alliance war.

A secret human weapon named River has been kidnapped from Alliance headquarters and takes refuge on Serenity, a raider space ship.

The Alliance will do anything to retrieve or stop River, including sending out a ruthless assassin willing to destroy entire villages of NCOÕs to get her back. River wants to get rid of her nightmarish Òvisions.Ó The captain wants money to fund his crew. The unseen rebels what RiverÕs secrets revealed. And so on…

The Alliance is looking out for it’s own best interests. The captain and crew of Serenity constantly argue over doing what’s best for them or for others. Simon’s willingness to risk the crew’s life for the safety of his sister, River.

Getting the word out about “Miranda” in spite of the Alliance threat. Using the “calming” chemical to make better people. River’s concern for the others’ safety with her aboard the Serenity. Shepard Book’s willingness to harbor the Serenity fugitives.

Should Mal have pushed the townie off their vehicle into guaranteed death at the hands of the Reavers (Self Interest) or kept the man and chucked the stolen money overboard (Morality)? Should the captain and crew of Serenity get rid of River (Self Interest) or take her to Miranda and reveal its secrets at any personal cost (Morality)?

Freeing the information found on Miranda will undo the Alliance’s hold and warn the populace about the dangers of the Alliance’s efforts to control human evolution. Unleashing the frenzied Reavers allows the Serenity to break through an otherwise overwhelming Alliance armada.

The Operatives chase after River results in hundreds of innocent deaths.

Run away, run away—the Serenity tries to hide from the Operative and the Alliance.

The Operative’s emotionless and ruthless approach to finding and retrieving River gets him closer to her faster than he would otherwise. Serenity’s captain and crew approach of meeting conflicts head on (“It’s a trap. Let’s go in.”) speeds the eventual conflicts with the Operative and the Alliance.

The few tmes the Serenity ducks out of sight or the captain puts off making a decision about River slows down their conflict with the Alliance.

The more the crew of Serenity understands who and what River is and the nature of the secrets she holds, the closer they get to their ultimate destination.

Mal is captain of the Serenity and haunted by the fact that he enlisted with and fought for the losers in the battle against the Alliance. ItÕs not so much a stigma as a dubious badge of honor.

Mal is deeply concerned with his crew’s future well-being, and the fact that he doesn’t seem to have much to look forward to (on a personal level) since Inara left.

Mal prefers to put off conflicts rather than to address them directly. Shepard chastises him for fence-sitting.

Mal doesn’t understand why others may choose him (as lover or leader), but is reluctant to fight it. On the other hand, he is quick and willing to make choices that may be unpopular.

Mal gets riled up with bad things happen to those who support him.

Mal got the short end of the stick when he signed up to fight with the rebels against the Alliance and the Alliance won. Mal believes chasing after Inara won’t solve anything.

Mal steers clear of Inara and other personal entanglements to keep peace.

When Mal acts in his own self interest, he loses credibility as a capable captain—his judgment is called into question. For example, when he chooses money over the villager during their bank robbery, and when he chooses to dump River and her brother off at the outpost because she’s a threat to Serenity’s safety.

We see Mal’s personal development as both Inara and his role as anti-Alliance fighter come more and more into his every life.

The Operative is a single-minded assassin blindly adhering to the AllianceÕs world view, even though he knows that is no place for him in it.

He finds faults in others through their “sins” but works to relieve them of their fears (to the opposite effect) as he kills them. For example, he kills the technician responsible for River after she escapes because the technician suffered the sin of “Pride” He rationalizes the technician’s death as a “good death” while the paralyzed technician slowly falls on the Operative’s upturned blade.

The Operative hopes to help bring about the Alliance’s “perfect” future even though he knows he is damned and that there is no place for him in it.

The Operative’s absolute control of his actions and ideologies blinds him to behavior that occurs outside his influence. For example, his belief that he has absolute control over Inara blinds him to her planting a bomb in his presence. The Operative’s control over Mal using the “stun” move is critically ineffective because Mal had that nerve relocated after receiving a war wound.

The Operative lets the crew of Serenity go and goes on the lamb himself once the broadcast of Miranda’s secrets have been broadcast.

The Operative finds logic to be incompatible and cumbersome to maintaining his fanatical beliefs. This is one reason he does NOT worry about the rationale behind the Alliance’s plans.

The Operative exists in almost a fanatic’s calm fueled by an unassailable feeling of righteousness. This makes him a most effective killing machine.

The Operative impacts Mal by killing any known associates of his. This produces severe doubt in Mal’s efforts to help River.

The Operative’s fanatic willingness to do whatever is necessary to bring about the Alliance’s new world order undermines his effect on Mal because it there is no room for negotiation.

Mal and the Operative play a game of psychological cat and mouse as hunted and hunter. The Operative tries a variety of psychological pressures (threat, fear, guilt, intimidation) while Mal counters with his own feints and unexpected reversals (knowingly enters traps, etc.).

Mal is quite content to continue being his independent self, but the Operative thinks all those that can should be “evolved” per the Alliance’s plans—that or erased.

The Operative is committed to the Alliance’s cause even though he will never be a part of their new world. Mal is firmly committed to his crew, even though their support of him is sorely tested.

The Operative’s eventual disbelief in the Alliance brings the former foes into their own tentative alliance.

Though the Operative’s directive is to pursue and procure River, his growing hunter/hunted relationship with Mal makes it more personal.

Mal does his best to keep away from contact with the Operative.

We can see the tightening of Mal and the Operative’s relationship as hunted and hunter as the cat and mouse game plans become clearer. While Mal is completely unaware of his hunted status at the beginning, he is nearly completely aware by the time he tries to warn his friends to leave before they’re attacked-too late.

River (and the knowledge she holds) is clearly the object of desire by the Alliance. The foes of the Alliance (the Ògood guysÓ) want her secrets exposed. The Story Goal is to make known the secret hidden within River.

The lesson of Miranda will not be learned and a likely repeat of the Alliance’s efforts to “evolve” mankind may result in extinction of most of the human race.

You've reached the "hub" for any and all Dramatica analysis of Serenity. In addition to the Storyform, you'll also find any additional analysis or media related to the story in question.

→ Sex and the City